The Ferris Beullers Day Off Jackpot slot game is an Amaya Gaming online slot game playable for real money or in the free play mode. This five reel online slot game was released in March 2015 and pays tribute to the 1986 cult classic film of the same name and features all but the main character, played by Mathew Broderick. The background does however show a representation of Ferris Beuller spending time alongside his parent’s pool.

The symbols include the Principal Mr Rooney, Ferris’s best friend Cameron, his girlfriend Sloane, his parents and the school secretary. Ferris’s black dog and Cameron’s father’s Ferrari are also included as symbols alongside queen, king and ace playing card icons. The top pay out is 5 000 coins for five Mr Rooney’s lined up on a pay line.

There is a wild and a scatter symbol on the Ferris Beullers Day Off Jackpot online slot game’s reels. These are represented by the game’s logo and the Save Ferris badge. The wild logo symbol only shows up on the second, third and fourth reels. It acts as a standard substitute symbol.

The Save Ferris badge scatter is the only symbol that pays for appearing in any position and not just left to right on a pay line. The scatter symbols also pay out according to the total bet. Two, three, four or five Save Ferris scatters pay out 2x, 5x, 15x or 200x.

One bonus game feature of the Ferris Beullers Day Off Jackpot slot is the Kick the Car bonus game. This bonus feature is inspired by Cameron’s meltdown scene where he destroys his father’s car.

This feature is triggered when the Ferrari symbol lands on the second reel at the same time Cameron appears on the fourth. Cameron will begin to kick the Ferrari which will increase the revs and thus increases the prize which is a multiple of the rev counter. The feature ends when Cameron stops kicking the Ferrari. 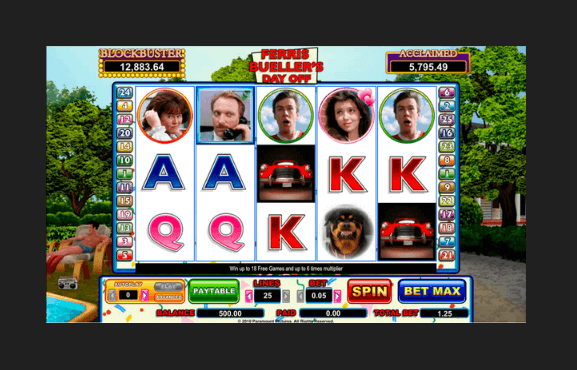 The fake the Parents free spins bonus round is triggered by landing at least three Save Ferris symbols. These are scatters and can appear anywhere in view. Pressing keys on the keyboard will determine the number of free spins to be played while the multiplier is awarded as Ferris decreases his days absent.

It is possible to re-trigger free spins but the same number of spins with the same multiplier applies. All free spins are played with the same triggering bet amount. The Ferris Beullers Day Off Jackpot Kick the Car bonus game cannot be triggered during this feature.