Cash Splash 5 Reel is a very plain looking real money slots game. It has been done in bright colours but there are no 3D graphics or exciting animations. This game is designed to look as close to old school fruit machines as possible, and this has a simple layout with no embellishments. The background colour is a gradient purple, which makes the yellow edged reels stand out. The progressive jackpot is displayed at the top of the screen above the reels where players can see it counting up as they play. Player info is laid out below the reels in a very simple way with only a few buttons.

All of the symbols in Cash Splash 5 Reel have been designed to look bold and brightly coloured. The playing card 10 through to Ace fits in with the theme as it looks just like the lucky seven, which could be mistaken for a playing card number too. Each symbol has a definite edge and a slightly bevelled look to it. The playing card symbols are worth the least. The ten will net you 50 coins for five, Jack 75 and Queen 100. The King and Ace are only a tad more with 120 for the King and 200 for five Aces.  Cherries and Bars will get you 300 and 400 coins respectively for five of a kind. Lucky sevens and a pile of cash are top paying base symbols and will give you 400 and 500 coins for five identical symbols in a row. 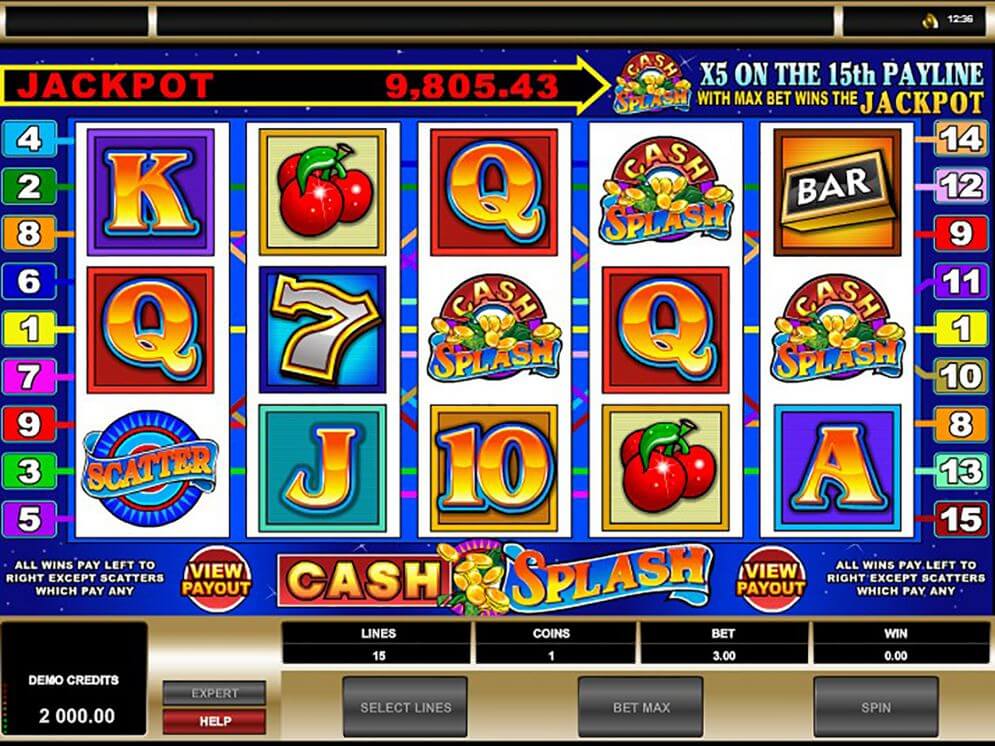 Cash Splash 5 Reel has only two features, both of which are special symbols. The first is a wild symbol that can replace any other symbol in the game except for the scatter. The wild is also the games standing jackpot icon, awarding a lucky player with 5000 coins for five of a kind. The wild is represented by the games logo.

The scatter symbol, which is clearly marked scatter, will pay out scatter wins no matter where on the reels it is found. These do not pay out coins but instead are a multiple of your line stake. The multiple increases with the more scatters that you find.

The progressive jackpot can be won only if you are playing all fifteen lines.  This jackpot can only be won by finding five Cash Splash 5 Reel logos in a row from left to right on the fifteenth line.